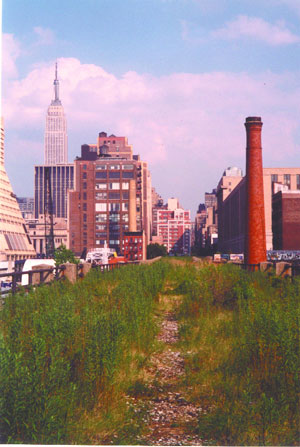 On Tuesday evening I had the opportunity to attend an Urban Land Institute of New York event at 5 Times Square. Transportation Transformed: Innovations in the Tapestry of Urban Transit presented a panel of four speakers who discussed different transit-related projects in various stages of development across New York City. It struck me while listening to the panel just how critical transportation infrastructure is to sustainability efforts, including green building, particularly in as dense a region as our metropolitan area. Below are links and a few quick thoughts on each of the four projects as presented by the panelists.

Probably the highest profile project- the conversion of the High Line (an abandoned, 1.5 mile elevated railway line on Manhattan’s West Side, see image to left) into public park space- is well underway, and should be completed sometime in 2009. New York Water Taxi (Douglas Durst is one of the company’s major backers) is expanding ridership through some innovative partnerships, notably with various waterfront developers in Brooklyn and Queens who are paying for the first year of buyers’ commutation costs to Wall Street (accomplished in as little as six minutes, in some cases).

While not the highest profile project, but in my opinion (and many others’) absolutely the most critical in terms of the long-term economic stability of our region, the Trans-Hudson Express (THE) Tunnel will double rail capacity into Manhattan’s Penn Station upon completion in 2016. Currently, there is exactly one track in and one track out of Penn; these two tunnels serve all rail traffic along the Northeast Corridor line between Boston and D.C., including New Jersey Transit- truly incredible if you think about it. THE Tunnel will increase capacity from 23 trains per hour to 46 and give rail passengers in northern New Jersey a one seat ride (i.e., no transfer requirements in either Secaucus or Hoboken) into Midtown. It’s an absolutely essential project for the future of the region and it’s encouraging to see the Port Authority and both New York and New Jersey state and local governments on board.

Finally, the Vision 42 project hopes to turn 42nd Street into an auto-free pedestrian mall with sixteen light rail stations between the Hudson and East Rivers. As somebody who waits to cross the corner of 42nd Street and 3rd Avenue every morning- possibly the worst intersection I’ve ever seen- I fully support this idea for a variety of reasons. Interestingly, studies performed by Vision 42 report that while only 5 percent of the auto traffic in Midtown between 34th and 47th Streets is attributable to 42nd Street, 60 percent of the available space along 42nd is devoted to automobiles- a gross imbalance.

It’s easy to forget that without a sustainable means for commuting to our buildings, whether it be from the suburbs or within the urban fabric, it really doesn’t matter whether or not those buildings are green. The New York City region seems to grasp that if it’s going to compete in the 21st century global economy, a sustainable transportation infrastructure is without question of the utmost priority.